World-class athletes at the highest levels of their sports have been practicing visualization for years. The best athletes have the ability to see the play unfold, the shot happen, or the route before them prior to executing. The sport doesn’t matter. The story is the same, and it’s often what separates pure, raw talent from true greatness. Visualization is a way for the brain to prepare the body for action. So, what does that have to do with fly fishing? Well, it’s the same for us, too. Visualization is an underutilized tool in the fly fisher’s tool box. Most of us are not world-class athletes and likely won’t ever be. Further, some of us don’t consider ourselves or the sport of fly fishing as particularly athletic. If you think about it though, we are combining our mental abilities and physical abilities in a natural setting to catch a fish that doesn’t want to be caught. Combine all the elements, and I think that makes us athletes of a kind. 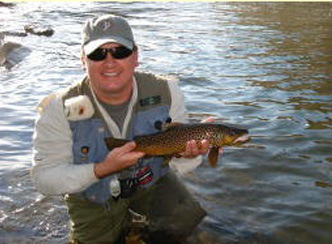 When you’ve been fly fishing a while, I really believe you develop a sixth sense about what is going to happen when you’ve made the right choices and executed properly. What I’m talking about is when you’ve made the right cast, mended just right all with the right fly in the right water. When all that comes together, it’s pretty magical and it allows you to almost know instinctively that the fish is there and is taking your fly. But, the question is how do you develop that sixth sense? The answer lies in visualization.

As a beginner, you start with picking a target to hit with your fly. Also, as a beginner, it may be helpful to close your eyes and see yourself making the perfect cast to hit the piece of water you’ve picked as your target. As you progress, you will start to add additional variables to your visualization process. Additional variables will include the location of the fish, the speed of the water current, the depth of the water, wind direction and speed, and how you want your fly to land on the water. The variables are probably infinite and, over time, you’ll begin to add them sub-consciously. As you progress in your visualization process, you also won’t have to close your eyes to see it. In fact, after a while, it all happens so quickly that it’s almost in the background.

Another advantage to visualization is fighting larger fish. When you get more advanced in your fishing situations and your visualization techniques, you’ll be prepared when you do hook that trophy fish because you’ve visualized and anticipated where the fish might run and how you’re going to deal with it.

I count myself fortunate that I get to spend so much time on the river both with clients and fishing on my own time. I’m truly convinced that it’s possible to build your powers of observation to the point where you can take into consideration more variables than is prudent to list here and then couple that with your ability to visualize the trout taking the fly, and you will get to the point where you just know what’s going to happen. All of this will start to happen without trying, and that’s pretty exciting.

So, let’s start visualizing that perfect cast, the fly landing on the water, the right mend, the fish taking the fly, the line tightening, and the pulse at the end of your rod. See it in your mind, and you’ll see it happen more often on the river.

Sean Baker is a guide with Three Rivers Fly Shop in Broken Bow, Oklahoma. Sean guides on the Lower Mountain Fork River for rainbow and brown trout. This is a year-round fishery with lots of insect hatches all year long. When he’s not on the river, you can find him painting or hanging out with his four-legged children and his wife Erica, who is also a guide.

Call or go online to book a trip with Sean or any of the other great guides at www.threeriversflyshop.com.